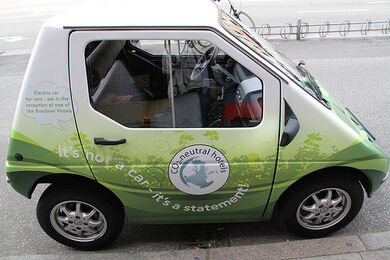 Source London, which will deliver 1,300 public charging points across London by 2013, is part of the Mayor’s plans for London to become the electric vehicle capital of Europe. The Source London network will create a single visual identity for electric driving across the capital, and allow members to charge their vehicles at any one of these public charging points for no more than an £100 annual membership fee. Currently electric vehicle drivers have to register in each separate borough they want to use charge points in. In preparation for this new network a website, www.sourcelondon.net, has also been launched providing a 'one stop shop' of information on electric vehicles, including charge point locations across the city. Once Source London has been launched in Spring 2011 drivers will be able to sign up for the scheme online.

The development of Source London, has been led by Transport for London in close collaboration with the London boroughs and a wide range of private sector partners – who will play a key part in funding and providing locations for the network's charge points. Discussions are now taking place with other UK cities developing charge point networks to ensure they can be used seamlessly by electric vehicle drivers and to ensure London's work can contribute to a national network of charge points. Transport for London has offered these cities the use of the trademarked Source brand which could mean the creation of a national network under a single identity.

The Mayor has recently reaffirmed a 100 per cent discount from the congestion charge for electric drivers in the capital, as well as other low emission vehicles, which offers electric vehicle owners using the zone a potential saving of more than £2000 a year.

Retrieved from "https://sca21.fandom.com/wiki/Electric_vehicles,_London?oldid=47310"
Community content is available under CC-BY-SA unless otherwise noted.