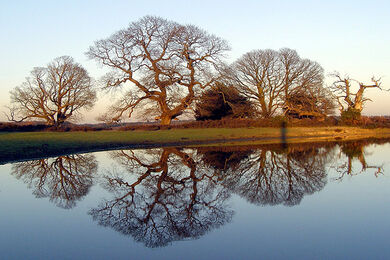 Hampshire, (abbr. Hants), is a county on the south coast of South East England. The county borders (clockwise from West), Dorset, Wiltshire, Berkshire, Surrey and West Sussex. The county has an area of 1,455 square miles (3,769 km²) and at its widest points is approximately 55 miles (90 km) east–west and 40 miles (65 km) north–south. The county town is Winchester. The 2001 census gave the population of the administrative county as 1.24 million; the ceremonial county also includes the cities of Portsmouth and Southampton, which are administratively independent, and has a total population of 1.6 million. Christchurch and Bournemouth, within the historic borders of the county, were made part of the non-metropolitan county of Dorset in 1974.

The New Forest National Park lies within the borders, as does a large area of the South Downs, which is also scheduled to become a National Park.

Bordon-Whitehill Shortlisted location for an Eco town (as of November 2008). Bordon W

Retrieved from "https://sca21.fandom.com/wiki/Hampshire?oldid=43709"
Community content is available under CC-BY-SA unless otherwise noted.