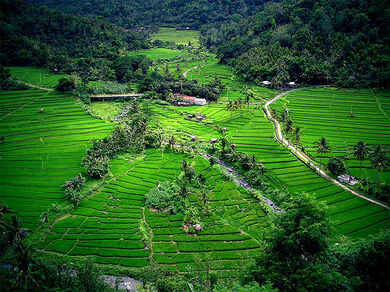 The Republic of Indonesia is a nation in Southeast Asia. Comprising 17,508 islands, it is the world's largest archipelagic state. With a population of over 234 million people, it is the world's fourth most populous country. The nation's capital city is Jakarta. The country shares land borders with Papua New Guinea, East Timor and Malaysia. Other neighboring countries include Singapore, the Philippines, Australia, and the Indian territory of the Andaman and Nicobar Islands.

Indonesia to stop handing out permits for companies to chop down rainforests and drain peatlands for two years, but deal does not protect millions of hectares of rainforest, Greenpeace, 27 May [2] topic

Your comment - Contribute via our Forums or a comment type article, or on any article via its talk page - click on 'talk' link at top of page

Retrieved from "https://sca21.fandom.com/wiki/Indonesia?oldid=43458"
Community content is available under CC-BY-SA unless otherwise noted.