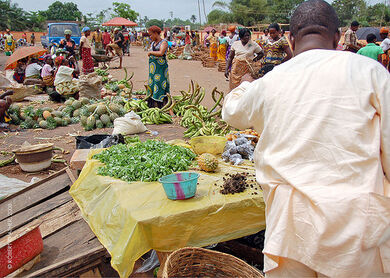 Nigeria, officially the Federal Republic of Nigeria, is a federal constitutional republic comprising thirty-six states and one Federal Capital Territory. The country is located in West Africa and shares land borders with the Republic of Benin in the west, Chad and Cameroon in the east, and Niger in the north. Its coast lies on the Gulf of Guinea, a part of the Atlantic Ocean, in the south. The capital city is Abuja.

Nigeria's largest city is Lagos. Lagos has grown from 300,000 in 1950 to an estimated 15 million today, and the Nigerian government estimates that city will have expanded to 25 million residents by 2015.

In terms of global warming, Africans contribute only about one metric ton of carbon dioxide per person per year. It is perceived by many climate change experts that food production and security in the northern sahel region of the country will suffer as semi-arid areas will have more dry periods in the future.

Retrieved from "https://sca21.fandom.com/wiki/Nigeria?oldid=44556"
Community content is available under CC-BY-SA unless otherwise noted.