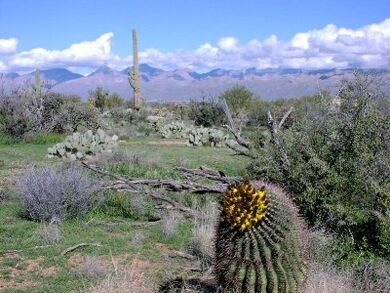 Tucson General information on our city to be considered in achieving sustainability.

Sustainable Tucson Notespage If you are not sure where to add your input, please put your notes here.

The information presented below is intended to be limited to that which is relevant to the development of long-term sustainability in the greater Tucson area. If the relevance is not self-evident, please include a brief entry explaining the connection.

Political: Governed by a mayor and 6-member city council, with a city manager handling day-to-day operations. It is also the location for the seat of the county government seat of Pima County. Tucson is located in the southeast part of the State of Arizona.

It is surrounded by five minor ranges of mountains.

Occupation Timeframe: The Tucson area has been inhabited for a long time, perhaps as long as 12,000 years ago, with archaeological evidence of villages around 4,000 years ago. The early residents are believed to have subsisted primarily as hunter-gatherer society, with eventual development of an irrigation canal system and some cultivated crops. As recently as 1900 perhaps just over 7,000 people lived in Tucson. At that time, the Santa Cruz River actually had open flowing water.

It has been the technology and infrastructure of the industrial era, not the natural climate which has allowed the population to reach that of the July 2005 city census estimate of just over one half million, with the greater Tucson population estimated to be near a million. Projections based on present trends are for the population to continue to grow.

Precipitation Estimate: Much of the city does not have rainfall collection or storage facilities, so the rains may cause the paradox of FEMA designated flood zones in a desert city. Officially Tucson covers an area of 195.1 square mile. If you could collect all of the rainfall at approaching 100% efficiency, the total amount of water collected annually for the city would be approximately 32 billion gallons. At a population of a million, that would be roughly 90 gallons per person per day.

Economy: Perhaps the largest economic forces are the University of Arizona and Davis-Monthan Air Force Base. The military presence feeds the presence of high-tech industries, with perhaps 1,200 businesses employing over 50,000 people in Southern Arizona. Tucson also has a high "snowbird" industry of retiree/tourists in the winter.

University of Arizona: Enrollment of over 37,000 students, and a staff of _____. Davis-Monthan Air Force Base:

Explorer: A free weekly newspaper for residents of the suburban communities north of Tucson.

Transportation: Absent changes, perhaps in reaction to eventual scare / expensive fuel, or restrictions imposed due to consequences such a global warming, private fossil fueled vehicles are the primary means of city ground transportation, with the public fossil fuel burning bus system, Sun Tran, a distant second. The Old Pueblo Trolley operates on the weekend essentially as a curiosity.

The city has some designated bike lanes but in the "big picture", bicycle use is still minor, with a focus around the University of Arizona primarily due to limited parking for motor vehicles. The city proper is relatively level, and if operation of large fossil fuel burning vehicles is priced out of the market then it remains feasible for human powered vehicles to provide transport.

Cooperative Housing: This can be seen as an expansion of the condo/townhome concept, with private fee simple ownership of an individual dwelling unit, and shared ownership of the common facilities. Parking tends to be outside of the living area with walkways and open space between the dwelling units. Tucson has three cooperative housing communities that maintain websites, Milagro, Stone Curves, and Sonora.